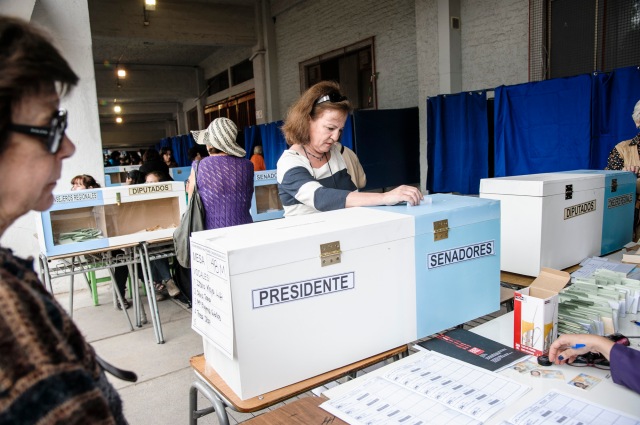 The scene at a voting site in Santiago’s National Stadium. Photo by Rodrigo Lopez

It ain’t over yet, despite some predictions that former president Michelle Bachelet would win a majority of votes in Sunday’s election.  The final tally gave her 46.67 percent, against Evelyn Matthei’s 25.01 percent, the rest spread among seven other candidates.

Just under 6.7 million Chileans voted, down from 6.9 million in the 2009 presidential election, and while this reflects the fact that voting is no longer obligatory the difference hardly suggests widespread voter apathy or cynicism.

So the air force generals’ daughters will face each other in a runoff election on December 15th.

The Christian Science Monitor has this piece on the issues in the election: http://www.csmonitor.com/World/Americas/2013/1116/Will-Chile-bring-back-former-President-Bachelet

Al Jazeera reports on continuing economic disparities in Chile, the greatest among any country in the 34-member Organization for Economic Cooperation and Development (OECD): http://www.aljazeera.com/indepth/features/2013/11/other-side-chile-economic-miracle-201311159282210130.html

And the Santiago Times reports on whether the Chilean Congress and Senate will go along with Bachelet’s proposals: http://santiagotimes.cl/chiles-parliamentary-elections-thorn-bachelets-side/

Colonia Dignidad, the secretive German settlement in southern Chile that became a detention and torture center during the Pinochet regime, is the subject of an excellent—if extremely painful to watch—documentary by Al Jazeera correspondent Lucia Newman.

“The Colony: Chile’s dark past uncovered” contains extensive interviews with survivors and opens with Newman’s own account of being shot at when she tried to visit the site years ago:

Earlier this month the Inter American Court of Human Rights ruled that the Chilean government had “excessively delayed”  an investigation into the imprisonment and torture of Leopoldo Garcia Lucero and ordered that he be awarded $32,000 in compensation. http://www.nacion.com/mundo/latinoamerica/Chile-investigaciones-Leopoldo-Garcia-Pinochet_0_1376062528.html

The Guardian newspaper has published an essay by Garcia Lucero, who has lived in Britain since 1975.  He writes that “no amount of money will be able to compensate me and my family for our suffering. The torture and forced exile destroyed our lives. But I am satisfied that the ruling sets a precedent. I hope it serves as a reminder that this should never happen again, anywhere in the world.” 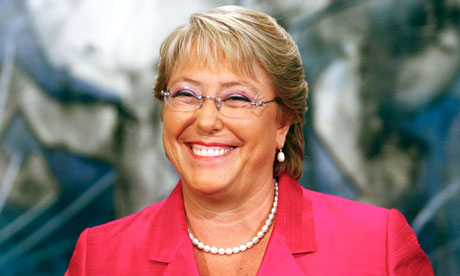 This blogger confesses to not paying quite enough attention to this month’s election in Chile, since Michelle Bachelet is so far ahead of other candidates in the polls. The most recent survey by the Centro de Estudios Públicos suggests that the former president may even win the first round of voting, in contrast to Chile’s previous three elections in which no candidate won a majority and a runoff vote was held. http://www.cepchile.cl/dms/lang_1/encuestasCEP.htm

Forbes has an opinion piece on the election by Axel Kaiser, director of the conservative think tank Fundación para el Progreso, who seems to want to counteract Chilean voter apathy by warning of the dire consequences in store for the country if Bachelet wins. The title asks “Is This the End of the Chilean Economic Miracle?” and notes that Bachelet’s center-left coalition, the Nueva Mayoría, now includes the Chilean Communist Party. http://www.forbes.com/sites/realspin/2013/10/28/is-this-the-end-of-the-chilean-economic-miracle/

The Santiago Times has weighed in on the Forbes piece http://santiagotimes.cl/forbes-article-warns-bachelet-end-chiles-economic-miracle/, noting that a recent JP Morgan Latin America Equity Research Report had favorably reviewed Bachelet’s economic platform. The Economist reports that Bachelet is already playing down expectations of any radical changes to come, quoting her as saying that Chile has done a lot of good things and that “you can be popular without being populist.”http://www.economist.com/news/americas/21589430-more-left-wing-michelle-bachelet-set-win-tide-social-discontent-cruising-back

On another subject, here’s a link to a recent piece by the New York Times’ Frugal Traveller on the sublime charms of Chiloe island: http://www.nytimes.com/2013/10/30/travel/churches-and-cheap-seafood-off-the-coast-of-chile.html