On two health-oriented trips to Cuba in the past year, what struck me was a systematically planned and organized primary care delivery system that captured the doctor-patient relationships of my father’s era of medical practice. Cuba treats healthcare as a human right, specifically stipulated in its constitution. Cuban nationals receive care for free, and have a neighborhood primary care physician who often knows them by name and sees them regularly.

Okay. That is what is supposed to happen. Here’s some more recent health news directly from Cuba:

14ymedio, the independent digital newspaper, reports on an outbreak of cholera in eastern Cuba http://www.14ymedio.com/englishedition/New-Outbreaks-Cholera-Santiago-Cuba_0_1793820604.html.

Translating Cuba, the English-language site for independent bloggers, reports on the reappearance of the dengue fever mosquito, saying around 30,000 people in the eastern city of Holguin have been exposed to the disease http://translatingcuba.com/holguin-besieged-by-dengue-fever-mosquito-14ymedio-fernando-donate-ochoa/

Dr. Eloy Gonzalez, a Cuban physician residing in the United States, writes El Blog de Medicina Cubana http://medicinacubana.blogspot.co.uk/, an invaluable source of information about health care in his native country. His most recent post contains disease statistics across the country compiled by the Pedro Kouri Tropical Disease Institute in Havana, revealing an increase in reported cases of syphilis, bacterial and viral meningitis, along with acute respiratory infections. 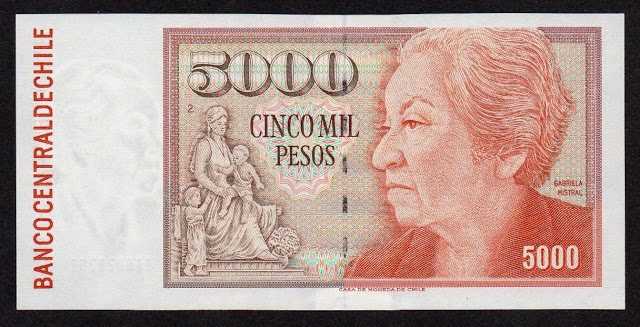 This week the U.S.Treasury announced that a woman will appear on a $10 bill in 2020. This is not the first time women have featured on U.S. currency: Martha Washington appeared on the $1 Silver Certificate between 1891 and 1896, Susan B. Anthony was on silver dollars from 1979 to 1981 and Sacagawea (explorers Lewis and Clark’s Shoshone guide) appeared on dollar coins in 2000. And none of these currencies are still in production.

Chile, however, has had a woman on its currency since 1981. Gabriela Mistral, one of the country’s two Nobel Prize-winning poets, appears on the 5,000 peso note.  She was the first Latin America to receive the prize, “for her lyric poetry, which, inspired by powerful emotions, has made her name a symbol of the idealistic aspiration of the entire Latin American world.”

Here’s one of her better-known poems

A child’s tiny feet,
Blue, blue with cold,
How can they see and not protect you?
Oh, my God!

Tiny wounded feet,
Bruised all over by pebbles,
Abused by snow and soil!

Man, being blind, ignores
that where you step, you leave
A blossom of bright light,
that where you have placed
your bleeding little soles
a redolent tuberose grows.

Since, however, you walk
through the streets so straight,
you are courageous, without fault.

And a link to the Gabriela Mistral Foundation, with an archive of her work: