The Associated Press reports on U.S. Secretary of State’s forthcoming decision on whether to recommend removing Cuba from a list of countries sponsoring terrorism: http://www.businessweek.com/ap/2013-03-23/key-us-decision-on-cuba-terror-designation-coming  The article notes that the decision will have a major impact on bilateral relations, either “ushering in long-stalled detente or slamming the door on rapprochement, perhaps until the scheduled end of the Castro era in 2018.”

Foreign Policy has a blog post about dissident Cuban blogger Yoani Sanchez, who told an audience at Washington’s Cato Institute that she believed the U.S. trade embargo against Cuba should be lifted: http://blog.foreignpolicy.com/posts/2013/03/19/yoani_sanchez_on_why_its_time_to_end_the_embargo

The U.S. State Department’s Bureau for Narcotics Control and International Law Enforcement Affairs annual report on drug trafficking had rather favorable things to say about Cuba, a country the region’s narcotraficantes would just love to bring into their fold.  The report notes that “Cuba’s domestic drug production and consumption remain negligible as a result of active policing, harsh sentencing for drug offenses, and very low consumer disposable income” and the country “maintained a significant level of cooperation with U.S. counternarcotics efforts “The report also praised “the technical skill of Cuba’s security services,” which gave it an edge over drug traffickers attempting to access the island.  http://www.state.gov/documents/organization/204265.pdf

And earlier this month Granma, Cuba’s official newspaper, published an interview with U.S. Consul General Timothy Roche on the procedure for obtaining a U.S. visa. The U.S. Interests Section in Havana requested the interview shortly after Cuban authorities lifted the exit visa requirement for most Cubans wishing to travel abroad.http://www.granma.cubaweb.cu/2013/03/11/pdf/pagina05.pdf

Has Cuba become a destination for Canadian pedophiles?  A recent joint investigation by the Toronto Star and El Nuevo Herald http://www.elnuevoherald.com/video/index.html?media_id=161053861 says so, and details the arrest of a Canadian accused of “making child pornography, six counts of sexual interference, invitation to sexual touching and committing an indecent act” during trips to Cuba between June 2011 and July 2012.  James McTurk, 78, is said to have made between eight to ten trips to Cuba per year—which raises uncomfortable questions as to how he afforded so much foreign travel on his postal worker’s pension and why neither Canadian nor Cuban officials noticed him for so long.

The RCMP study also said that Cuba did not appear to have many of the common factors associated with child sex offenses. “Unlike other countries mentioned in this document, Cuba’s population is well-educated and literacy rates are very high. The police and other officials appear to treat sex crimes, particularly those against children, seriously and professionally.” Such crimes usually occur not in tourist resorts where security is relatively good, but in private residences (casas particulares) where pedophiles are able to “access children and locals who are willing to facilitate crimes against children in return for financial compensation.” http://media.elnuevoherald.com/smedia/2013/03/13/10/50/a3cPA.So.84.pdf

It should not be too difficult for Cuban officials to monitor suspicious foreigners in Cuba, for international visitors are photographed upon arrival and departure.  This blogger stayed at two casas particulares in Havana, and my hosts were required to take my tourist card and register my stay with the authorities within 24 hours of my arrival.

Last year I spoke to someone from a child protection NGO who had worked in Cuba.  He said that while child sexual abuse was a problem in the country, it tended to occur along the same lines as in Western countries—that is, such cases usually happened within households and not as the result of human trafficking. Cuba has a low birth rate, which means there aren’t that many cases of impoverished rural families sending children to live with distant relatives in the cities, where they may fall through the cracks of whatever social support system is in place.  The country’s housing shortage means that living quarters are often crowded and sleeping spaces shared in uncomfortable ways.

“It’s a huge problem,” he said, adding that his Cuban hosts would not share any statistics on the issue, “and we quickly learned not to ask.”

Here’s a headline in the New York Times: Venezuela, Strong Voice of the World’s Poor and the subhead says, “It Is Using Its Wealth to Back Its Policies.”

The article describes Venezuela as “a rich neighbor in a poor corner of the world,” and says that while “Venezuela is implementing a $54 billion domestic development plan aimed at redistributing national wealth and reducing dependence on raw materials exports, it has also committed $3 billion, or 10 percent of its gross territorial product, in loans or other assistance to Latin America, the Caribbean and international organizations.” The president has nationalized the oil and mining industries previously controlled by American companies and supports Latin American integration. “The notion of a united Latin America has been the unfulfilled dream of statesmen here since the time of Simon Bolivar,” the report concludes.

This article, which appeared on August 15, 1976, is referring to  the first administration of Carlos Andres Perez (1974-79). After two other elected presidents came and went, Perez was elected to a second term beginning in 1989.  But then oil prices fell and when Perez imposed austerity measures Venezuelans rioted. A certain army colonel later attempted a coup against the Perez government:  Hugo Chavez.

Hugo Chavez, the late Venezuelan president, with Chile’s Sebastian Pinera at a summit in Caracas two years ago.

Chile has declared three days of mourning and President Sebastián Piñera will fly to Caracas this Friday for the funeral of Hugo Chávez.  Piñera said that while he had his disagreements with Chávez, he admired the Venezuelan leader’s “courage and valor.”  One can only speculate what the conservative entrepreneur and flamboyant leftist really thought of each other, but somehow the two managed to keep bilateral relations on an even keel.

It didn’t start out that way. After winning the presidential run-off vote early in 2010 Piñera told foreign correspondents in Santiago that he had deep differences with the way public issues were handled in Venezuela.

“These differences are profound and have to do with the way democracy is conceived and implemented, the way the model of economic development is carried out, and many more,” he said. Chávez reacted by saying, in essence, that Piñera’s comments were what one might expect from a wealthy businessman.  “I think he is one of the richest in Chile and among the richest in the hemisphere,” he said. “We do not get involved in Chilean matters, so they should mind their own business.”

Chile’s rightwing Union Democratica Independiente (UDI), which forms part of the Piñera government’s political coalition, staged a walk-out when the Chamber of Deputies held a minute’s silence for Chávez Tuesday evening.  UDI leader Gustavo Hasbún said that while party members voted to hold the homage they refused to take part.

“We have always maintained that [Chavez’s government] was a disguised dictatorship which permanently violated human rights and freedom of expression,” he said. 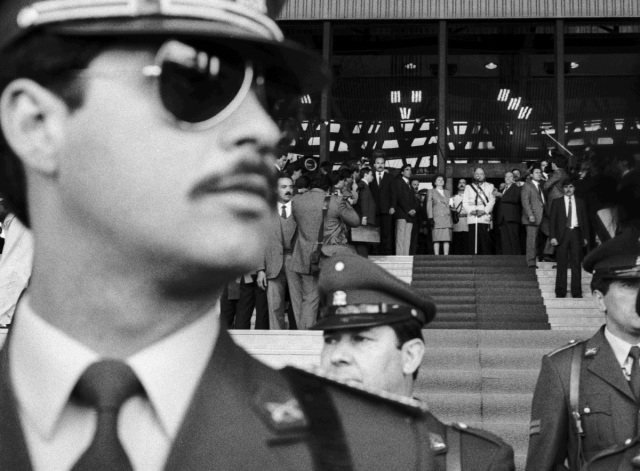 Pinochet at a rally with regime supporters in 1988. Photo by Marcelo Montecino.

–a chant by Pinochet supporters

Here, courtesy of YouTube, are two parts of a documentary on the press and the Pinochet regime’s one-man presidential plebiscite in 1988.  There are opening remarks by Pinochet speaking to supporters and blasting the foreign press “from Spain, from France, from Germany.”