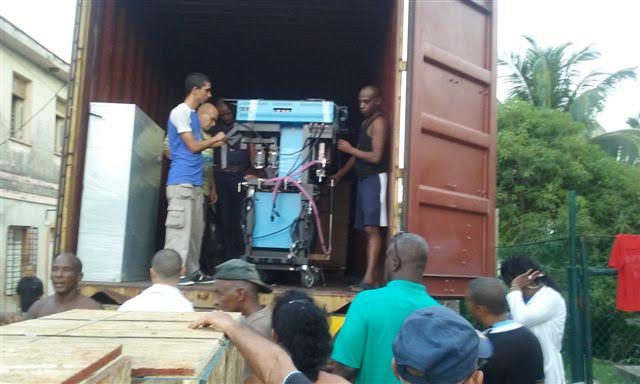 MEMO (Medical Equipment Mobilization Opportunity) http://www.memoministry.org/ is a charity based in Thunder Bay, Ontario which collects and ships redundant medical equipment and supplies no longer needed by Canadian hospitals to clinics in Cuba, El Salvador and Liberia. This blogger interviewed the charity’s director, Dr. Jerome Harvey, for my book, Cuban Health Care: Utopian Dreams, Fragile Future and one of the better quotes he gave me was that “the Cuban health care system is like a well-trained army with no weapons and no ammunition.”

The charity pays the shipping costs, which often include overland transport over Canada’s vast territory before the medical equipment can be packed into a shipping container and sent overseas. Run entirely by volunteers, MEMO receives shipping funds from private donors but has no other financial backing. In the spirit of Christmas, here’s a recent letter from Dr. Harvey about a serendipitous discovery:

“A year ago a little baby girl was born in Cuba.

Due to complications, she required a tracheostomy and ventilator.

She is a year old now, still needs the ventilator, but can go home with her parents who are doctors if they can obtain a ventilator.

On $60 a month salary her parents could never afford to buy a ventilator if one was even available.

It would have to be a special ventilator for an infant and run on electricity using room air, as oxygen would be impossible expensive.

Meanwhile, last year in Watson Lake, Yukon the little 50-bed worn out hospital was replaced with a brand new one.

Much of the hospital’s equipment was left behind being replaced with new equipment.

Educational consultants with the EFCCM [Evangelical Free Church of Canada Ministries] John and Naomi Hall met me at Shalom Clinic in El Salvador.

Fast forward to spring 2015. John and Naomi learn of all the used by still useful hospital equipment to be disposed of from the closed Watson Lake Hospital.

They contact me with a long list of medical equipment almost all of which would be extremely useful in overseas hospitals.

They get permission from the Yukon Health Authority to donate it to MEMO.

The problem: Trucking companies would charge $6000 to bring it to Thunder Bay.

Guess what?  The pastor of the EFCCM church in Watson Lake grew up in North Western Ontario and volunteered to drive his flat bed truck with all the equipment on it  to Thunder Bay while he visited his relatives. The  Halls paid for the cost of the diesel fuel.

The stretchers, delivery table, monitors and boxes and boxes of stuff arrived in October.

We have slowly been working at unpacking and checking all kinds of really useful medical equipment over the last three months.

Now we go to the first week of this November.

While there she meets Dr. Montiel Yumar who tells her about the baby needing a ventilator.

Back in Canada Martha asks me if MEMO could find a ventilator.

I tell her we don’t have one, but who knows.

The next week I am going through boxes from the Yukon.

You guessed it! There was a ventilator suitable for a child weighing more than 22 lbs. Runs on electricity 110V using room air with battery back p for power failures up to 10 hours long.

As well the Halls had included three brand-new breathing tubes to connect the machine to the baby’s tracheostomy tube.

It was compact weighing about 8 pounds.

The only thing it needed was a new back up battery which is now on order from “Amazon.”

We are looking for a tourist to take it to Cuba for us.”

Some commentary on the state of hospitals in two very different Latin American countries:

Helen Cordery is a young blogger from New Zealand living in Santiago’s Recoleta neighbourhood, and her accounts of everyday life in the Chilean capital make excellent reading. Her most recent piece is a frightening account of rushing her 18-month old son to a local hospital when he stopped breathing, and the hellish week she and her husband spent at his bedside. While there was real kindness on the part of some hospital staff, Cordery and her husband Luis were told by a hospital nutritionist (!) that their son “should be drinking fruit juices instead of water, and that every meal needed to have a sweet treat afterwards.”

Over at the Blog de Medicina Cubana, there is an opinion piece in English on the neglected state of Cuba’s medical facilities.  It is a somewhat awkward Microsoft translation from the original Spanish, but worth a look:

On two health-oriented trips to Cuba in the past year, what struck me was a systematically planned and organized primary care delivery system that captured the doctor-patient relationships of my father’s era of medical practice. Cuba treats healthcare as a human right, specifically stipulated in its constitution. Cuban nationals receive care for free, and have a neighborhood primary care physician who often knows them by name and sees them regularly.

Okay. That is what is supposed to happen. Here’s some more recent health news directly from Cuba:

14ymedio, the independent digital newspaper, reports on an outbreak of cholera in eastern Cuba http://www.14ymedio.com/englishedition/New-Outbreaks-Cholera-Santiago-Cuba_0_1793820604.html.

Translating Cuba, the English-language site for independent bloggers, reports on the reappearance of the dengue fever mosquito, saying around 30,000 people in the eastern city of Holguin have been exposed to the disease http://translatingcuba.com/holguin-besieged-by-dengue-fever-mosquito-14ymedio-fernando-donate-ochoa/

Dr. Eloy Gonzalez, a Cuban physician residing in the United States, writes El Blog de Medicina Cubana http://medicinacubana.blogspot.co.uk/, an invaluable source of information about health care in his native country. His most recent post contains disease statistics across the country compiled by the Pedro Kouri Tropical Disease Institute in Havana, revealing an increase in reported cases of syphilis, bacterial and viral meningitis, along with acute respiratory infections.