The U.S. naval officer wanted by Chilean authorities for his alleged involvement in the deaths of two American citizens during the 1973 military coup may have died in a Santiago nursing home. Captain Ray E. Davis, former commander of the U.S. military group in Chile, had been charged with complicity in the deaths of Charles Horman and Frank Teruggi (see earlier posts: https://notesontheamericas.wordpress.com/2011/11/30/captain-davis-and-el-caso-missing-2/  and https://notesontheamericas.wordpress.com/2011/12/02/the-whereabouts-of-captain-davis/). The Associated Press contacted his wife, who is—or was—living in Florida and she said her husband was suffering from Alzheimer’s and in a nursing home.

But that nursing home may have been in Chile, not Florida. The New York Times reports http://www.nytimes.com/2013/09/27/world/americas/chile-hunt-for-justice-winds-up-as-enigma.html?ref=world&_r=0 that a death certificate issued in Santiago indicates that Davis, 88, died of “multisystemic failure” on April 30 of this year and that American Embassy officials were unaware he was even in the country until they were informed of his death. Davis apparently arrived at the nursing home about the same time as a Chilean judge issued an indictment, charging that he had given information on Horman and Teruggi to Chilean intelligence officers.

Horman’s widow Joyce is understandably suspicious, and wants proof that Davis’s navy pension has been cancelled (although Davis’s widow may still be receiving payments).

Here’s  a link to the Horman family’s web site: http://www.hormantruth.org/ht/

Mother Jones has a disturbing piece by Janis Terrugi Page, sister of Frank Teruggi, one of two Americans killed in the aftermath of Chile’s 1973 military coup.  She quotes one of her brother’s last letters from Chile, in which he describes his personal situation as “one of relative safety…as a foreigner, I should have little trouble leaving the country if the situation should ever get so bad that it be necessary.”

The Financial Times has an article on the business dealings of General Augusto Pinochet’s former son-in-law, Julio Ponce, who oversaw the military regime’s privatization program and ended up as director of one of these former state companies, the Sociedad de Química y Minera de Chile (SOQUIMICH), which has become the world’s largest producer of potassium nitrate, iodine and lithium. One of the company’s minority shareholders has charged that more than 100 illegal operations took place between 2009 and 2011, including one in which people with direct ties to Ponce benefitted by over $100 million. He could face a ten-year prison sentence.

Forbes profiled Ponce three months ago, estimating his net worth at $3.3 billion. 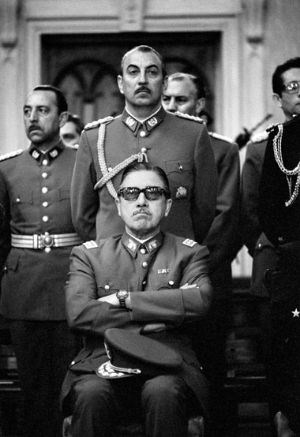 It was forty years ago today that a Dutch photographer took a picture that would become a symbol of Chile’s new military regime: General Augusto Pinochet, arms folded and wearing sunglasses, sits with a grim and defiant expression. Other army generals stand at attention, including one positioned directly behind Pinochet’s chair.

Chas Gerretsen captured that image during the Te Deum mass traditionally celebrated on September 19, the second of Chile’s two-day fiestas patrias, the “Day of the Glories of the Army.”  Two former Chilean presidents, Jorge Alessandri (1958-64) and Eduardo Frei (1964-70), were also in attendance, but their successor, Salvador Allende, had died in the coup eight days earlier.

Other photographers were angling for wider shots of the Te Deum service or of four junta members together, and the commanders of Chile’s navy, air force and national police were seated in a row with Pinochet. “But none looked as imperial as General Pinochet,” he told the Chilean newspaper La Tercera. Gerretsen decided to take individual shots of each junta member, and when he approached Pinochet members of his entourage suggested he remove his sunglasses.  But the Chilean army commander ignored them, saying “yo soy Pinochet.”

An Australian politician, Peter Phelps, has told the New South Wales parliament that many people “believe that General Pinochet was a reluctant hero, a morally courageous man” and that “yes, Pinochet killed people and if you know of any way to overthrow a government other than military force then let me hear about it.” http://www.sbs.com.au/theother911/ Phelps’ remarks drew immediate calls for him to be censured, and a small group of Chileans held a protest outside the state parliament building. http://www.abc.net.au/news/2013-09-16/chileans-protest-nsw-mp27s-pinochet-remarks/4960420

Australia’s SBS network has a special feature on Chile, with a report on Australian intelligence agents working to destabilize Salvador Allende’s government and an interview with Adriana Rivas, former secretary to the Pinochet regime’s secret police director,  Manuel Contreras, who now lives in Australia and justifies the use of torture as necessary “in order to break people.” She says she has happy memories of working for the security forces and that “it was exciting, travelling in limousines and staying at the best hotels in the country.” http://www.sbs.com.au/theother911/

La Nación has an interview with Manuel Contreras himself, who states that a thousand desaparecidos, people missing and never accounted for following their arrest by the regime’s security forces, are buried in Santiago’s Cementerio General.  He also claims that former president Michelle Bachelet and her mother were not held at the DINA’s notorious Villa Grimaldi detention center but at an air force barracks.http://www.lanacion.cl/manuel-contreras-los-detenidos-desaparecidos-estan-en-el-cementerio-general/noticias/2013-09-10/180518.html

The Economist on wounds still unhealed in Chile, forty years after the military coup: http://www.economist.com/news/americas/21586339-successful-country-past-still-haunts-divided-coup

In the Washington Post, an opinion piece by Heraldo Muñoz on whether Pinochet can be credited for any of Chile’s economic improvements. The answer is no, and he quotes Peruvian Nobel laureate Mario Vargas Llosa who observes that dictatorships invariably produce “atrocities that leave civic and ethical sequels infinitely costlier than the status quo.” http://www.washingtonpost.com/opinions/heraldo-mun-oz-is-augusto-pinochet-responsible-for-chiles-success/2013/09/12/5d53ded8-1737-11e3-be6e-dc6ae8a5b3a8_story.html

And finally, a guest post by this blogger on the University of California Press web site: http://www.ucpress.edu/blog/15950/a-brutal-anniversary/ 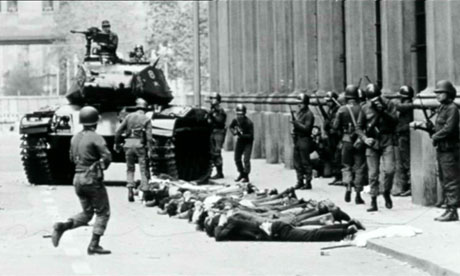 This blogger was a student at Washington University in St. Louis when the coup occurred. There was a newspaper strike, and the apartment I shared with friends did not contain a television, but the news spread quickly.  The following day, September 12, students were handing out flyers on campus denouncing the military takeover and attributing it to the work of the Central Intelligence Agency.

Photographer Marcelo Montecino, whose pictures are in my book, The General’s Slow Retreat, has an amazing collection of photographs of Chile before and after the coup, including some by his brother, who disappeared in October 1973:  http://www.flickr.com/photos/marcelo_montecino/sets/99847/

CIPER, Chile’s investigative journalism center, has a special feature on the 40 years since the coup: http://ciperchile.cl/especiales/golpe/

The Santiago Times has a q and a interview with human rights lawyer Carmen Hertz, whose husband was summarily executed during the notorious Caravan of Death killings, in which she discusses the country’s evolution over the past four decades: http://www.santiagotimes.cl/opinion/question-answer/26696-qaa-chilean-human-rights-lawyer-carmen-hertz

This month will mark 40 years since the military coup that brought General Augusto Pinochet to power, and the Chilean magazine Caras has a special edition—which is quickly selling out—to mark this anniversary http://www.caras.cl/. Center-right presidential candidate Evelyn Matthei is on the cover, and inside she tells an interviewer that the tax reforms proposed by her opponent, former president Michele Bachelet “will bury growth and employment.”

A survey released last month by the Centro de Estudios Públicos http://www.cepchile.cl/1_5349/doc/estudio_nacional_de_opinion_publica_julio-agosto_2013.html#.UiYmntIqiSq asked respondents their opinions, favorable or unfavourable, of a list of Chilean politicians and public figures, and Bachelet received the most favorable ratings—64 percent—to Matthei’s 32 percent.  The survey’s authors emphasized that these ratings were not the same thing as political support or voting preferences. There was a separate question asking respondents who they thought would become Chile’s next president, regardless of their own sympathies, and 75 percent predicted it would be Bachelet. Another question asked those polled who they would like to see become president, and Bachelet received 45 percent, Matthei 11 percent.

It should be pointed out that voting is no longer obligatory in Chile, and most respondents (72 percent) said that they would either definitely vote or would likely do so.  But 52 percent indicated they were either not very interested, or definitely uninterested in the election, which is scheduled November 17.  Stay tuned.