Grafitti on a wall in Santiago provided the cover picture for the Chilean edition of 1984.

This month marks the 65th anniversary of George Orwell’s death, and here’s one of the lesser-known stories of the great writer’s legacy, courtesy of the Pinochet regime in Chile.

It was 1983, the military dictatorship had been in power nearly ten years and the first stirrings of protest on a national level were about to explode into demonstrations up and down the length of Chile’s narrow territory. Three young journalists—two Chilean, one American—began an afterhours project to translate and publish Orwell’s dystopian masterpiece, 1984.

There were plenty of copies of Animal Farm, Orwell’s bitter satire of Stalinism, on offer in Chilean bookstores, but 1984 seemed conspicuous by its absence.  A search around Santiago turned up a Spanish language copy in the British Council Library, an edition translated in Spain under Franco which had cut out the course language and sexual scenes in some of the passages, as well as the Newspeak appendix at the end of the book. Newer editions were unavailable, and if the dictatorship had not officially censored 1984, the implied threat of confiscation, along with high sales taxes, were enough to discourage most booksellers from importing any newer editions of the book.

So the three friends decided to produce a Chilean version of 1984, meeting several evenings a week and working on a typewriter. A  curfew was in effect, which meant they often held all-night translating sessions. Over eight long months the team debated how to best to translate the text. A reference to one character’s “thick negroid lips” made them pause, but if they softened the racist language in their Spanish translation, wouldn’t they be guilty of Newspeak as well?  They opted for a direct translation: gruesos labios negroides. About halfway through they decided that Big Brother should not be translated as Hermano Mayor (which could mean “older brother”) but Gran Hermano. This meant a time-consuming task of going over each typewritten page, using Wite-Out correction fluid.

My friend and colleague Lezak Shallat was one of the translators. “We had this romantic idea of samizdat circulation, underground,” she recalled. “But halfway through, the prior censorship restriction was lifted and publishing became feasible. Sammy (Samuel Silva, another friend and colleague) contacted some publisher who agreed to it, but only if we paid for it, which we did. I remember that my share was US $400, a huge investment for me at the time.”

The translators–Fernando, Lezak and Sammy.

In addition to paying for the publication, the trio had to produce their own publicity, a tricky undertaking under a dictatorship. They decided the publicity should consist solely of grafitti on walls around Santiago, and they drove through the city looking for walls to paint—a rather risky operation in itself. The grafitti idea was later adopted as the cover of the book. And the Chilean edition of 1984 eventually rose to the bestseller list of El Mercurio, the country’s largest newspaper, whose editorial policies supported the Pinochet regime. 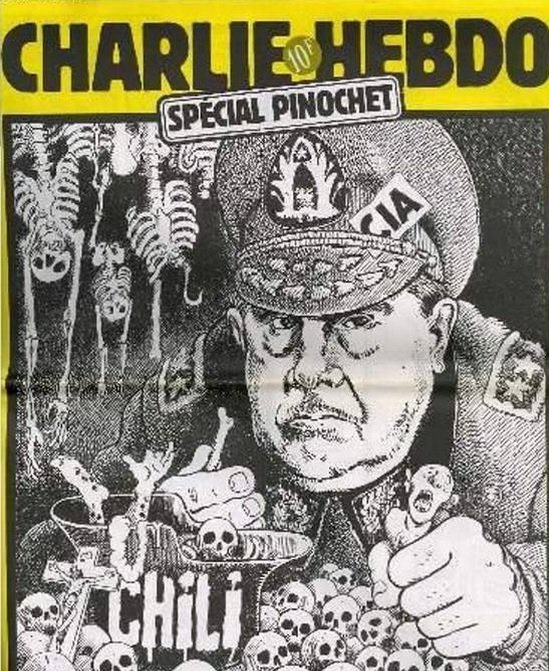 A special edition of Charlie Hebdo devoted to Pinochet

The Clinic is a satirical Chilean magazine begun during the late dictator’s detention in London in 1998; the Chilean version of Charlie Hebdo, if you will.  Over the years the French periodical published a number of items about Pinochet and The Clinic has just published a round up of Charlie Hebdo’s  cartoons and the special edition devoted to Pinochet::

The photograph of Hernandez and his newborn daughter published in the Cuban newspaper Granma.

Gerardo Hernandez, one of three Cuban spies released last month as part of the US-Cuba rapprochement, is the proud father of a baby girl born in Havana this week, the Cuban government newspaper Granma has reported. While negotiations between the two countries were still underway, U.S. officials allowed Hernandez to have his wife artificially inseminated while he was still in prison, with his sperm transported to Havana.

This is a moot point in many parts of the developing world, where births often take place without medical attention of any kind, but it seems a curious anachronism in light of Cuba’s much publicized health care system.  This blogger visited a facility for women with high risk pregnancies in Havana, the Hogar Materno Leonor Perez, where the doctor on duty said Cuban fathers were not permitted to attend their children’s births and that there were no midwives in the country.

There is a very interesting study on this subject by researchers from the University of Havana and the Escuela Nacional de Salud Pública that was published in a Brazilian health journal in 2012 (http://www.scielo.br/scielo.php?script=sci_arttext&pid=S1413-81232012000700029&lng=es&nrm=iso&tlng=es) and reprinted in a somewhat different form late last year in the Revista Cubana de Salud Pública (http://scielo.sld.cu/scielo.php?pid=S0864-34662013000400009&script=sci_arttext). The researchers followed 36 women undergoing childbirth in three hospitals, comparing the practices in Cuban maternity wards with recommendations by the World Health Organization. They concluded that “knowledge about pregnancy, childbirth and postpartum in Cuba is currently deficient” and that “the routine use of some medical interventions and the institutional regulations described herein are considered expressions of physical and gender violence.” Surgical procedures, such as episiotomies, were usually performed without any explanation, the women were left with their gowns open and examined in full view of medical and non-medical personnel and were obliged to lie on their backs during delivery.

And here’s a link to a short documentary on Cuban childbirth, Antesala, by Brazilian filmmaker Pedro Freire, with English subtitles:http://vimeo.com/10285661