The English translation of Isabel Allende’s Maya’s Notebook has finally been released, and here are a few reviews:

From the Seattle Times: http://seattletimes.com/html/books/2020798646_bookallendexml.htm

Ok, that’s enough for now.  And The New Yorker has a story in its April 22 edition, “Mexican Manifesto,” by the prolific Robert Bolaño. Once again, this blogger wonders whether the Chilean writer really did die in Barcelona a decade ago and might not be in hiding and continuing to produce fiction:  http://www.newyorker.com/fiction/features/2013/04/22/130422fi_fiction_bolano

Cuba this week condemned the attack on the Boston marathon, with Cuban Foreign Ministry spokeswoman Josefina Vidal expressing “the most heartfelt condolences of the people and government of Cuba to the people and government of the United States, particularly those directly affected by this tragedy.” http://abcnews.go.com/International/wireStory/us-foe-cuba-sends-condolences-marathon-attack-18971181#.UXCpXqLCaSo

For anyone bemused by reports of a scientific study supposedly showing health benefits Cubans enjoyed during their country’s  “special period,” the hardship years following the collapse of the Soviet Union, here’s a link to the original article in the British Medical Journal: http://www.bmj.com/content/346/bmj.f1515

And the Washington Post has a fascinating profile of Ana Belen Montes, the U.S. Defense Department analyst who was recruited by Cuban intelligence and is currently serving a 20-year sentence for espionage: http://www.washingtonpost.com/sf/feature/wp/2013/04/18/ana-montes-did-much-harm-spying-for-cuba-chances-are-you-havent-heard-of-her/

The Economist has an interesting piece on the recent impeachment of Chile’s education minister, Harald Beyer, describing him as an apolitical “educational nerd” who also acted as an independent advisor Socialist President Michelle Bachelet.  The article notes that while he cut the interest rate students pay on their educational loans from 6% to 2% and made more money available for low-income students it was not enough to satisfy more radical reformers. http://www.economist.com/blogs/americasview/2013/04/education-chile

The Financial Times blog Beyond Brics reports on a controversy over Chile’s inflation statistics: http://blogs.ft.com/beyond-brics/2013/04/18/in-chile-clothing-prices-cause-statistical-uproar/#axzz2QrdMTXML

The Associated Press reports on the rescue of 97 crew members from a burning Chinese fishing boat near Chile’s Bernardo O’Higgins research base in Antarctica.  The Chilean navy has sent a tugboat to haul away the Chinese craft and prevent an oil spill. http://www.suntimes.com/news/world/19574819-418/chile-rushes-to-aid-ship-in-antarctica-after-fire.html

UPI has a piece on the return of Huemel deer, an endangered species featured on the Chilean coat of arms, to their natural habitat in Patagonia: http://www.upi.com/Science_News/2013/04/16/Threatened-iconic-deer-in-Chile-on-the-way-back-to-recovery/UPI-45321366152636/

Poet Pablo Neruda was buried alongside his wife Matilde Urrutia at their coastal home in Isla Negra.

Pablo Neruda’s bone samples will be sent to a laboratory at the University of North Carolina for toxin testing, giving investigators a better chance of determining whether the Nobel laureate was poisoned in his hospital room nearly 40 years ago (see earlier posts https://notesontheamericas.wordpress.com/2013/04/08/exhuming-pablo-neruda/  and https://notesontheamericas.wordpress.com/2011/12/06/what-killed-pablo-neruda/). A team of Chilean and foreign forensics specialists are already examining Neruda’s remains and are expected to issue a preliminary report on their findings April 22. Judge Mario Carroza, the Chilean prosecutor in charge of the investigation, told Radio Cooperativa http://www.cooperativa.cl/noticias/cultura/literatura/pablo-neruda/restos-oseos-de-neruda-seran-analizados-en-estados-unidos/2013-04-12/135923.html that Neruda’s casket cannot be returned to the grave site until he receives the forensics reports.  Rodolfo Reyes, a lawyer and the late poet’s nephew, said the Neruda family wants investigators to “take all the time in the world so that no doubt remains.”

On a more pleasant note, here’s a link to the Fundacion Neruda web page on Isla Negra, where the poet is buried: http://www.fundacionneruda.org/en/isla-negra/history.html 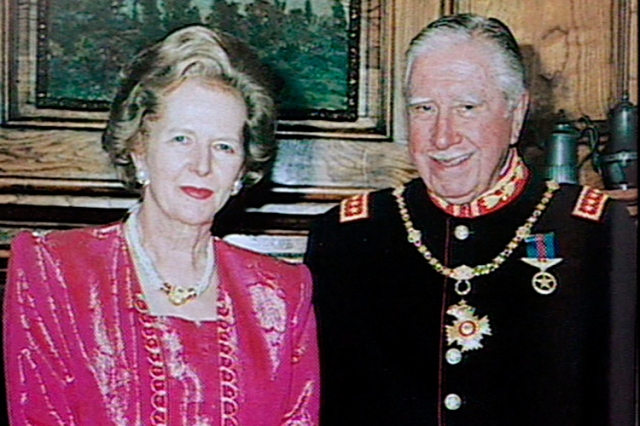 A Reuters photo of Thatcher and Pinochet at a reception in Santiago in March, 1994.

The Fundación Presidente Pinochet has taken out full page advertisements in El Mercurio, Chile’s largest newspaper, expressing its condolences over the death of Margaret Thatcher, saying the former British Prime Minister “had defended Chile’s jurisdictional sovereignty during very difficult moments in our recent history.” This refers to Thatcher’s public defense of Pinochet during his detention in London from October 1998 to March of 2000, when she called him Britain’s “friend and ally” and claimed he had “brought democracy to Chile.”

Jon Lee Anderson of The New Yorker interviewed Pinochet in London shortly before his arrest and has a blog post about the Chilean dictator and the Iron Lady, noting that Britain lifted its arms embargo against Chile the year after she took office and that the Chilean military helped Britain with intelligence on Argentina during the Falklands War

“Thereafter, the relationship became downright cozy, so much so that the Pinochets and his family began making an annual private pilgrimage to London. During those visits, they and the Thatchers got together for meals and drams of whiskey. In 1998, when I was writing a Profile of Pinochet for The New Yorker, Pinochet’s daughter Lucia described Mrs. Thatcher in reverential terms, but confided that the Prime Minister’s husband, Dennis Thatcher, was something of an embarrassment, and habitually got drunk at their get-togethers.” http://www.newyorker.com/online/blogs/comment/2013/04/neruda-pinochet-thatcher-chile-murder-exhumed.html

La Segunda has a story on Thatcher’s visit to Chile in 1994, including an incident in which she fainted while giving a speech to local business leaders.  The article reports that Thatcher had just praised Chile for defeating socialism and instituting free market economic policies when her speech slowed and she fell forward against the podium. http://www.lasegunda.com/Noticias/Internacional/2013/04/836777/su-fuerte-vinculo-con-chile-desmayo-en-santiago-y-su-defensa-a-pinochet

Almost a year ago I wrote about Hartmutt Hopp, the German doctor who fled Chile after a court charged him with supplying children to the pedophile leader of Colonia Dignidad, a secretive sect used by the Pinochet regime as a detention and torture center.  https://notesontheamericas.wordpress.com/2012/05/09/the-never-ending-colonia-dignidad-horror-show/

Hopp, 68, resurfaced in western German city of Krefeld, and as the German constitution does not allow the extradition of German citizens, may have believed himself beyond the reach of the law. But German prosecutors began their own investigation and this week said they were awaiting a special request from Chile for Germany to carry out the sentence against Hopp.  And Amnesty International has been campaigning for Hopp’s arrest, handing out leaflets about the case in the doctor’s home town.

“Normally we call for the release of prisoners,” Amnesty International’s Klaus Walter told the German newspaper The Local. “But in this case it is the other way around.” http://www.thelocal.de/national/20130409-49027.html#.UWSPNqLCaSo

A scene at Pablo Neruda’s funeral shortly after the military coup in September 1973. Marcelo Montecino, who took this photo, recalls that “the procession came past the morgue where lists of the dead were posted on the door. As the crowd gathered at the gate of the cemetery they started to sing “The International” plaintively but also full of rebellion and anger.”

How long does a man live, after all?

Does he live a thousand days, or one only?

For a week, or for several centuries?

How long does a man spend dying?

The investigation into the death of Nobel Prize-winning poet Pablo Neruda began nearly two years ago, and this week his remains are being exhumed.  Was Neruda, who was suffering from prostate cancer, poisoned in his hospital room shortly after the 1973 coup? He was planning to fly to Mexico with other Chilean asylum seekers and his driver maintains the poet called him to say, “come quickly because I was sleeping and a doctor gave me a shot in the gut. I’m in a lot of pain and I’m boiling.”

But investigators are warning that, nearly four decades after the death, they may not be able to determine whether he was poisoned. Eva Vergara of the Associated Press reports

“Neruda’s remains have been buried for years in soil that receives intense coastal humidity. Once they are exhumed, investigators will then have to work with what experts say is outdated technology and equipment.

“No big or false hope should be made about the exhumation and the analysis of the remains of Neruda yielding a cause of death” said Dr. Luis Ravanal, a forensic specialist.

Chile’s legal medicine laboratory “lacks basic equipment for the analysis of toxics and drugs that even the most modest labs own,” he said. “Technically there’s a big limitation; there is no sophisticated equipment to detect other substances, so they’ll invariably have to seek other labs.”

Chilean Communist Party lawyer Eduardo Contreras, who is overseeing the exhumation, said he was disappointed that outside experts were not allowed.

“There’s no ill doing or trickery, but I think this not rigorous enough,” Contreras said.

Some more background on the poet’s death and the investigation by the Guardian’s Jonathan Franklin: http://www.guardian.co.uk/world/2013/apr/07/pablo-neruda-exhumed-murder-investigation

Olga Weisfeiler, whose brother disappeared on a hiking trip to Chile in 1985, is making her 13th trip to the country to press for a resolution in the case.  In August of last year an investigating judge ordered the arrest of eight retired police and military officials in connection with the kidnapping and disappearance of Boris Weisfeiler, a mathematics professor at Penn State University and experienced backcountry trekker.  But since then there have been no significant developments in the investigation, and Olga Weisfeiler is meeting with the U.S. ambassador in Santiago as well as Chilean officials to discuss the case. A story in the Boston Globe reports that U.S. Secretary of State John Kerry has taken an interest in the Weisfeiler disappearance:  http://bostonglobe.com/news/nation/2013/03/31/for-newton-woman-quest-for-closure-continues-brother-disappearance-chile-three-decades-ago/M20LMeXq9Z24sodZnNDMSP/story.html

The Centro de Investigacion Periodistica (CIPER) has a story http://ciperchile.cl/2013/03/06/empresa-de-la-universidad-de-harvard-es-procesada-por-tala-ilegal-de-bosque-nativo-en-chiloe/ on companies owned by Harvard University accused of illegal logging in southern Chile.   The I Love Chile news web site has the English version of the story: http://www.ilovechile.cl/2013/03/20/harvard-university-companies-accused-illegal-logging-chilo/83237

The New York Daily News has an article on harvesting water from fog in the Atacama desert, noting that “fog catchers” made of giant mesh nettings held by pipes are revolutionizing life in the world’s driest desert, “to the point where small-scale agriculture has become possible.” http://www.nydailynews.com/news/world/world-driest-desert-chile-harvests-water-fog-article-1.1304082