Now this is interesting. The Committee to Protect Journalists (CPJ) published a blog post on the case of Raúl Peñaranda, a Chilean-born reporter who has lived in Bolivia since he was a baby and whose book, Control Remoto, documents efforts by government authorities to control independent media outlets. These efforts include advertising boycotts, labor inspections, tax audits and the sale of newspapers and television stations to business owners sympathetic to the government of Evo Morales.

Earlier this year Bolivian Communications Minister Amanda Davila called a news conference to denounce Peñaranda, saying he represented a dangerous “beachhead” for Chilean interests in the country. Chile and Bolivia have diplomatic relations at the consular level, and the sea outlet lost during the War of the Pacific remains a major issue between the two countries.

But it appears that the real issue was Peñaranda’s book, which was due to appear a few days later. “The government was very upset with me and the only way they could try to discredit me was to say I was pro-Chilean,” he told CPJ. 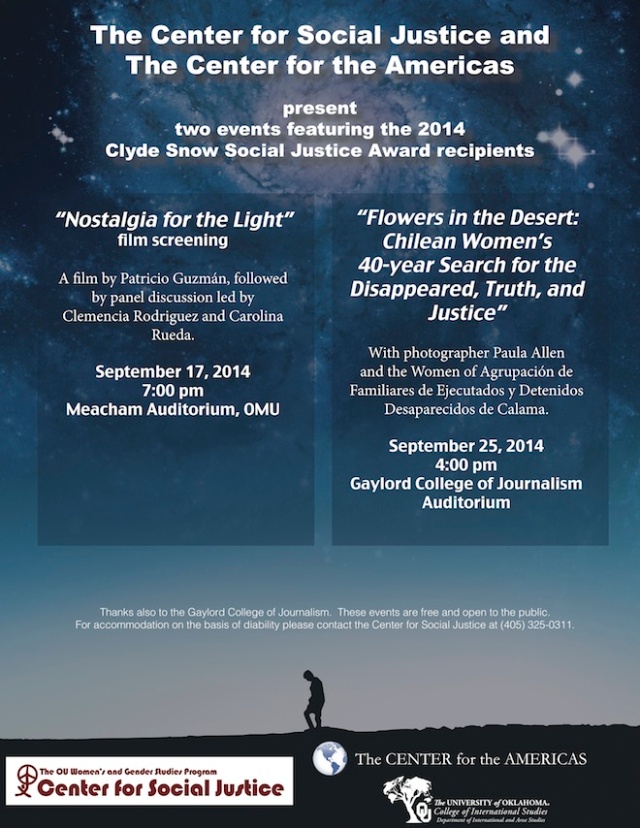 The University of Oklahoma’s Center for Social Justice has honored Chile’s Association of Relatives of Executed and Missing Political Prisoners of Calama with an award named in memory of Clyde Snow, a forensic anthropologist who helped identify victims of political violence in Argentina, Guatemala and other countries. The award committee said that the Calama group “embodies the spirit of the award, to recognize the efforts of those who strive to restore the humanity and dignity of communities that have suffered human rights violations.” http://csj.ou.edu/clyde-snow-social-justice-award/

Here’s a link to an earlier post on the case, which was the subject of a book by my friend and colleague Paula Allen: https://notesontheamericas.wordpress.com/2013/05/30/grief-in-the-atacama-desert/

September is always an interesting month in Chile:  the anniversary of the brutal 1973 coup, followed a week later by the stress-busting two days of fiestas patrias on the 18th and 19th.  And once again, Google has come up with a Chile-themed logo.

Chilean military guarding prisoners at the National Stadium after the 1973 coup. Photo by Marcelo Montecino

It’s been 41 years, but this year’s anniversary of the military coup that ousted Salvador Allende is one of the most stressful in recent memory. A bomb exploded in a food court at a Santiago metro station a few days earlier, injuring 14 people and prompting President Michelle Bachelet to convene an emergency meeting with cabinet and security officials. The Economist’s Americas blog has this post: http://www.economist.com/blogs/americasview/2014/09/bombing-chile

There have been small-scale bomb explosions in the past, but most have occurred late at night, when few people were around, and this is the first that seems to deliberately target the public. According to Chile’s interior minister, Bachelet’s mother was in the area when the bomb detonated (she was unhurt). Some background on earlier incidents from the BBC :http://www.bbc.co.uk/news/world-latin-america-28850708

El Mostrador reports that 1,600 members of Chile’s paramilitary police force, the carabineros, have been mobilized and positioned in “the most vulnerable areas.” The electricity company Chilectra has also placed extra personnel on alert in case of power cuts. http://www.elmostrador.cl/pais/2014/09/10/once-bomba-falsos-avisos-de-explosivos-y-1600-carabineros-desplegados/

Several organizations of retired military officials published a paid insert in La Tercera newspaper, defending the 1973 coup, which it described as “a task of reconstruction…which continues to be recognized by Chileans who love order and security.” The statement said that while “delinquents, subversives, terrorists and killers of military and police officers are pardoned, given amnesty or protected, those who fought and created the conditions of security and order which permitted the nation’s progress have been condemned without due process,” a reference to continuing investigations into human rights violations during the Pinochet regime.

And the investigations keep coming. Last week a magistrate indicted three more retired officials in the killing of folksinger Victor Jara shortly after the coup: http://www.ilovechile.cl/2014/09/05/anniversary-vctor-jaras-murder-prosecuted/119005

And Foreign Affairs has this exchange by Peter Kornbluh and Jack Devine on the U.S. role in the coup: http://www.foreignaffairs.com/articles/141859/peter-kornbluh-jack-devine/showdown-in-santiago

It’s been a long, hard project over the past few years, with research and travel expenses coming out of our own pockets, difficulty accessing credible sources and sifting through vast mounds of hyperbole and disinformation.  But I think my co author, Steven Ullmann, and I have made a  contribution to the knowledge bank: https://rowman.com/ISBN/9780739176030

Steve is the director of the University of Miami’s Center for Health Sector Management and Policy ( http://www.bus.miami.edu/faculty-and-research/faculty-directory/management/ullmann/ ). Full disclosure here:  we are step cousins and although neither of us has Cuban heritage, there is an indirect family link to Cuba, via my late stepfather, who was a first cousin of Steve’s father. Here is a link to an earlier post I did on this subject: https://notesontheamericas.wordpress.com/2012/12/05/looking-for-harris-the-cuban-connection/