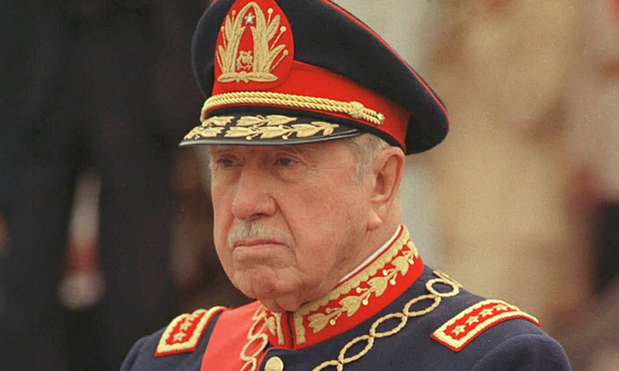 The United States has turned over a collection of newly classified documents on the 1976 car bomb murder of Orlando Letelier and his American colleague, Ronni Moffitt in Washington in 1976.  Letelier was a former Chilean ambassador to the United States and cabinet minister under the socialist government of Salvador Allende (1970-73); he and Moffitt worked at the Institute for Policy Studies, a left-leaning think tank. A subsequent grand jury investigation resulted in an extradition request for the head of the Pinochet regime’s security agency, Colonel Manuel Contreras and two other Chilean intelligence agents—which the regime rejected.

The new batch of documents was delivered by U.S. Secretary of State John Kerry during a meeting with President Michelle Bachelet this past week in Santiago. As I write this, only two have been published and they confirm what most people familiar with the case already knew–that Pinochet ordered the killings.  One is a 1987 memo from then Secretary of State George Schultz to President Ronald Reagan states

“We have long known that the Chilean secret police/intelligence service was behind this brutal act, perhaps the only clear case of state-sponsored terrorism that has occurred in Washington, D.C.”  Schultz then speculates whether the U.S. government would want to indict Pinochet himself, and that his role in the assassinations and cover-up “is of the greatest seriousness and adds further impetus to the need to work toward the complete democratization of Chile.”

The other document is a State Department cable sent early in 1987, with a couple of source names deleted and mentions assertions by Contreras that Pinochet had ordered the Letelier assassination. Contreras told another senior army official that he had hidden sealed documents in several locations “in the event of his, Contreras’ death.”

More documents to follow, and the National Security Archive web site, with its lengthy file on other declassified material on the case and on Chile, is a good place to find them: 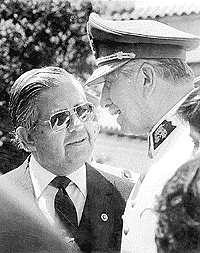 He was the terrifying fist in the dictator’s glove, but even the dictator was afraid of him. Manuel Contreras, the Chilean army officer whose secret police agency, the Direccion de Inteligencia Nacional (DINA), brought a new level of fear and terror to Chileans at home and abroad. died in Santiago’s Hospital Militar,  the same facility where General Augusto Pinochet died in 2006.

It was just a few months after the 1973 military coup that ousted President Salvador Allende, a socialist, when Contreras appeared at a meeting of Chile’s military commanders, cabinet and the intelligence directors of the army, air force, navy and national police, the carabineros. Pinochet announced that then-Colonel Contreras would be heading a new security agency, the Direccion de Inteligencia Nacional (DINA). Some of the officers expressed misgivings—the country was already under tight control, a state of siege was in effect and political prisoners were being rounded up and in many cases executed, so why the need for even more security services? The carabinero intelligence director, General German Campos, thought the new agency sounded like “a bunch of vulgar bodyguards” reminiscent of Salvador Allende’s Cuban-trained security detail.

Contreras’ DINA, which reported exclusively to Pinochet, proved to be much more than a group of bodyguards and would enable Pinochet to maneuver his way from one of four junta members to Supreme Leader of the Nation. Drawing officials from all the branches of the military, plus right-wing civilians, the new security agency expanded its tentacles, organizing secret detention centers throughout Chile. Every government ministry had its DINA informants; former junta member and air force commander General Gustavo Leigh told this blogger that he was surprised to discover a DINA agent working in his department. The junta’s press secretary once found that DINA agents had broken into his office and stolen press credentials, in order to disguise themselves as journalists. Contreras ingratiated himself with Pinochet’s wife Lucia, and obliged when she asked him to tap the phones of other military wives.

His most ambitious project was Operation Condor, a joint security program with the military regimes of Argentina, Uruguay, Brazil, Paraguay and Bolivia to monitor and eliminate leftists and any former officials who might prove troublesome. Chileans who had fled their country and found refuge in Argentina were arrested and made to disappear. María Cecilia Magnet was kidnapped, along with her Argentine husband, Guillermo Tamburini, at their home on July 16, 1976.  Luis Elgueta was arrested 11 days later with his wife and sister-in-law. None were ever seen again.

Cecilia Magnet and Guillermo Tamburini, who disappeared in Buenos Aires in 1976 and were never seen again.

General Carlos Prats, Pinochet’s former army commander, was killed with his wife in a car bomb explosion in Buenos Aires in 1974. Two years later former defence minister Orlando Letelier and his American co-worker were killed by another car bomb in Washington, D.C., sparking an FBI investigation leading to a U.S. extradition request for Contreras and two other DINA officials. Pinochet refused the extradition request, and reorganized the DINA into a supposedly more benign agency, the Central Nacional de Informacion (CNI). Pressure from Washington continued, and Contreras was finally removed, though not before Pinochet promoted him from colonel to general. A series of suspicious bombings rocked Santiago, which the carabinero police investigated and found to be the work of Contreras’ agents.

As civilian Contreras formed a private security agency headquartered in downtown Santiago, and many suspected he continued to do jobs for the Pinochet regime. He was also on the board of a private company, Telefonica Manquehue, which received an exclusive contract to provide phone coverage in one of Santiago’s expanding eastern neighborhoods. (This blogger lived for a time in this area—and the service was terrible.) But change was coming to Chile, and in 1988 Pinochet lost a one-man presidential plebiscite and would be forced to hand over the government to an elected civilian.

Contreras was understandably nervous. According to a declassified U.S. State Department cable, in February 1989 Contreras sent an intermediary to the American Embassy with a strange message. He claimed to have had four separate meetings with “gringos” in which it was agreed that neither government would reveal any information damaging to Contreras, Pinochet or U.S. officials. The U.S. had broken this agreement with recent initiatives on the Letelier case, and if a new understanding was not reached, Contreras was prepared to take unspecified actions against the U.S. He was willing to give a sworn statement in Chile on the Letelier assassination, provided that he and U.S. officials could agree on an “appropriate story,” such as stating that Letelier had been a pro-Castro Cuban agent killed by Cuban exiles. As if to show he could still provide useful information, Contreras indicated that one of his agents had been involved in drug trafficking with one of Pinochet’s sons. The cable, written by deputy chief of mission George Jones described Contreras as “the most dangerous man in Chile” and that the possibility of “a Contreras-initiated terrorist act” could not be excluded. A handwritten note attached to the cable suggests ways to drive a wedge between Contreras and Pinochet:

“I would be rightly surprised if any USG {US government] person made any such deal with this piece of dogshit—we should talk with (deleted) how this could be used to further pressure Contreras—the best defence may be an offense, e.g., telling the For Min [Foreign Ministry] that this guy is threatening us and that we will hold the GOC [Government of Chile] responsible if any of this is carried out—might signal in our way that Contreras is obviously willing to make up stories about everybody to blackmail them into protecting him (i.e., that we realize Pinochet et al are in the same boat) and imply that it would behoove Pinochet to go ahead and cut this guy loose.”

Pinochet did eventually cut Contreras loose, but it would take years and the new civilian governments were wary of provoking a rebellion by the Chilean army, which Pinochet still controlled. Chile’s Supreme Court, which had rejected the U.S. extradition request, reopened the Letelier case in 1991. Four years later Contreras was sentenced to seven years in prison for his role in the double murder, and it would take several months of negotiations with his lawyers and family before Chilean officials could finally take him into custody. He was sent to the Punta Peuco prison north of Santiago, specially built to hold human rights violators. More investigations by Chilean prosecutors followed, and at the time of his death Contreras was serving combined jail sentences of over 500 years.

An Australian politician, Peter Phelps, has told the New South Wales parliament that many people “believe that General Pinochet was a reluctant hero, a morally courageous man” and that “yes, Pinochet killed people and if you know of any way to overthrow a government other than military force then let me hear about it.” http://www.sbs.com.au/theother911/ Phelps’ remarks drew immediate calls for him to be censured, and a small group of Chileans held a protest outside the state parliament building. http://www.abc.net.au/news/2013-09-16/chileans-protest-nsw-mp27s-pinochet-remarks/4960420

Australia’s SBS network has a special feature on Chile, with a report on Australian intelligence agents working to destabilize Salvador Allende’s government and an interview with Adriana Rivas, former secretary to the Pinochet regime’s secret police director,  Manuel Contreras, who now lives in Australia and justifies the use of torture as necessary “in order to break people.” She says she has happy memories of working for the security forces and that “it was exciting, travelling in limousines and staying at the best hotels in the country.” http://www.sbs.com.au/theother911/

La Nación has an interview with Manuel Contreras himself, who states that a thousand desaparecidos, people missing and never accounted for following their arrest by the regime’s security forces, are buried in Santiago’s Cementerio General.  He also claims that former president Michelle Bachelet and her mother were not held at the DINA’s notorious Villa Grimaldi detention center but at an air force barracks.http://www.lanacion.cl/manuel-contreras-los-detenidos-desaparecidos-estan-en-el-cementerio-general/noticias/2013-09-10/180518.html

The Economist on wounds still unhealed in Chile, forty years after the military coup: http://www.economist.com/news/americas/21586339-successful-country-past-still-haunts-divided-coup

In the Washington Post, an opinion piece by Heraldo Muñoz on whether Pinochet can be credited for any of Chile’s economic improvements. The answer is no, and he quotes Peruvian Nobel laureate Mario Vargas Llosa who observes that dictatorships invariably produce “atrocities that leave civic and ethical sequels infinitely costlier than the status quo.” http://www.washingtonpost.com/opinions/heraldo-mun-oz-is-augusto-pinochet-responsible-for-chiles-success/2013/09/12/5d53ded8-1737-11e3-be6e-dc6ae8a5b3a8_story.html

And finally, a guest post by this blogger on the University of California Press web site: http://www.ucpress.edu/blog/15950/a-brutal-anniversary/ 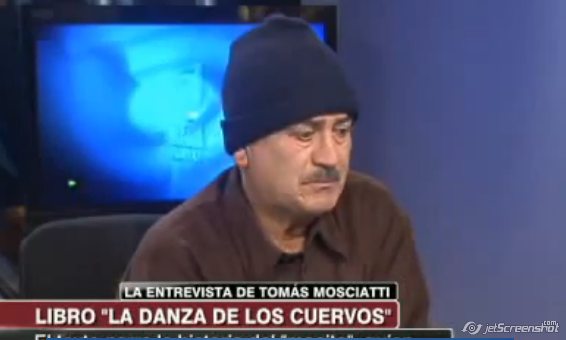 Recently the Chilean public was treated to the extraordinary story of Jorgelino Vergara, a man who survived extreme poverty in the country’s rural south and became a civilian employee of the DINA, working at the Simon Bolivar site after serving as servant at the home of DINA chief Manuel Contreras. A book about Vergara’s life, La Danza de los Cuervos, or The Dance of the Ravens, was published last month and he was later interviewed on CNN-Chile.

Vergara was one of a dozen children born to an impoverished campesino family. By the time he was five both parents had died and he went to live with an older brother employed on a large agricultural estate.  He grew up during the governments of Christian Democratic President Eduardo Frei (1964-70) and Socialist President Salvador Allende (1970-73) but neither administration’s land redistribution or agrarian reform programs had any effect on his family’s fortunes. Vergara’s brother had nine children of his own and the family was squeezed into three rooms in a shed-like building used to house farmworkers.  He had little schooling, and was often hungry.  Several years later he followed another brother to Santiago, searching for work and became a live-in servant at the home of a senior Chilean military officer—who just happened to the second-most powerful man in the country.  It was the first time in his life he had access to adequate food and shelter, and Vergara was later promoted to a job at the detention center, where almost no prisoners ever emerged alive.

Little did DINA officials know what an observant witness this poor campesino youth was. To watch the CNN interview—and be warned, it is horrifying: http://www.ecos.cl/2012/07/entrevista-jorgelino-vergara-el-mocito.html